The Samaritan understanding of the Messiah 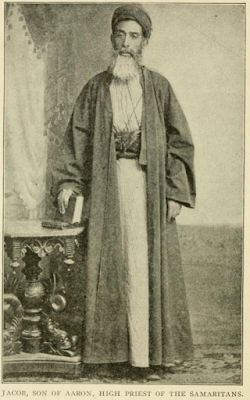 My post on Jesus and the Samaritan woman raised the question of whether the Samaritans really used the term Messiah, and if so what they meant by it. A bit of digging led me to what I was looking for: a slim volume entitled The Messianic Hope of the Samaritans, consisting of a 1906 letter by Jacob ben Aaron, High Priest of the Samaritans, together with his responses to some specific questions put to him by his Protestant correspondents. I quote some relevant passages.


The reference concerning the establishment of the Second Kingdom, affirming the appearance of "THBH" [Taheb] or a Prophet at the end of time of whose appearance we have a promise, is found in Ex. xx, in the last verses, which are not found in the Torah of the Jews. It reads, "They said well. Let their consciences uphold my fear, and the keeping of my commandment, all the time: so that it may be done well unto them and their children. I shall set up for them a prophet from among their brethren, like unto thee, and I shall put my words into his mouth and he shall speak to them all that I command him. And it shall be that the man who harkens not to the words which he speaks, I shall make him thereto responsible." These words concern the prophet in whose coming we believe. Again, "The prophet who dares to address words in my name and speaks what I have not commanded him, and he that speaks in the name of foreign gods shall be killed." The same is stated again in Deuteronomy, as also one may find in the Torah of the Jews, Deut. xviii. 15.

This passage from Deuteronomy (duplicated, apparently, in the Samaritan version of Exodus), is the sole scriptural basis for the belief in the Taheb.

The High Priest explains, with numerous scriptural quotations (and some rather strained interpretations!) that the primary role of this prophet will be to restore Israel to power in their ancestral lands, where they will rule over everything from the Nile to the Euphrates. He then lists the signs by which the prophet -- or Messiah -- may be known.


As to the Messiah, with whose coming we are promised, there are proofs and demonstrations in regard to his coming. As our learned men have explained in their voluminous commentaries, he will rise and perform miracles and demonstrations; he will uphold religion and justice. Among other proofs he will produce the following three:

1. The production of the ark of testimony, which is the greatest attestation for Israel. [. . .]

2. He will produce, at his hand, the staff which was given by the Creator (who is exalted) to our lord Moses (upon him be peace), about whose attribute a reference is made as follows: "And this shall be to thee as a sign," in order that miracles be performed thereby.

3. He must produce the omer of manna which our fathers ate, while in the wilderness, for forty years. This is the greatest proof, because, after all this period, it will be found to have undergone not the slightest change. When our ancestors, in the days when manna used to fall, would keep some of it till the morrow, it would become rotten and wormy. Therefore, it would be a proof none could deny if it should appear sound after this long interval and remain in its sound state. Thus the people of the second kingdom might see it and confess reverently and increase in exalting and glorifying the Creator (who is exalted), for the power of producing such a marvel.

These three proofs must be verified by the Prophet; and without them his claim would be considered illegal.

The title Messiah was used, then, for the Taheb, at least by the Samaritans of the early 20th century. The three signs generally amount to an expectation that the Messiah would do what Moses did.

The quotations that follow are from William E. Barton, reporting some questions that were put to the High Priest and his answers.


In the little treatise the Messiah was depicted as a prophet. But the Christian Messiah is spoken of as "Prophet, Priest and King." It seemed an interesting question whether the Messiah of the Samaritans were to be more than a prophet. The High Priest answers this inquiry:

Of course the Samaritan hope is not colored by any of the Jewish memories of the throne of David, and the treatise gave no hint as to any kingly role. Asked concerning this, the High Priest answers:

"The Messiah will be a prophet, and will be acknowledged as a prophet. That will be his title, as the prophecies give it. But he will also be a king."

Asked about Genesis 3:15 and 49:55, generally understood by Christians to be Messianic prophecies, the High Priest replied that they had "no Messianic significance whatsoever."


To Christians it will be interesting to know whether the Samaritan Messiah is expected to be in any sense divine. The High Priest answers:

"The Messiah will not be in any sense a Son of God. He will be a prophet like Moses and like his brethren, as it is told in Deut. xviii. 15-22 [. . .] This is the passage of the Torah which tells us what the Messiah will be, and I hope you will read it with a clear eye, as you always read everything."

Another thing was asked of the High Priest, namely, what would be the attitude of the Messiah toward Christians and other nations. He answers:

"The Messiah will be a prophet, as I have told you, and will no doubt work signs to prove his mission. There will be unusual signs and wonders, which I described in the little book. But he is to be a king, and rule the earth from Shechem, the ancient seat of power, and from his holy mountain, Gerizim. He will call all the world to acknowledge him, and they will do so. He will bring blessings to all nations that acknowledge him."

Still one thing more was asked the High Priest as he sat in his tent while the fires were heating the ovens for the sacrifice of the lambs for the Passover, Will the Passover continue after the Messiah comes?

"The Passover will continue after the Messiah comes. It is a perpetual feast. It has no reference whatever to the Messiah."

Barton closes the volume by summarizing what the High Priest has said thus:


So far as the treatise indicates, the Samaritans do not look for any vicarious sacrifice on the part of their Messiah. His career, when he comes, would appear to be one of victory and tranquil rule, primarily religious, but with some political significance. The sacrifices are declared not to be prophetic of his mission. The passages quoted by Christians from the Pentateuch as Messianic are held not to refer to him. Practically the whole content of Samaritan Messianic prophecy appears to be derived from Deut. xviii. 15-22, in which the Messiah is a prophet like unto Moses, raised up from among the people, and one of their own brethren.

Assuming (and, yes, it is a bit of an assumption) that the beliefs of the 1st-century Samaritans were transmitted more-or-less intact to their 20th-century descendants, these comments by the High Priest help us understand what the Samaritan woman would have understood Jesus to be claiming when she said, "I know that Messias cometh," and he replied, "I that speak unto thee am he."
at January 14, 2020

This was very interesting. I did not know that the Samaritans had their own understanding of the Messiah. Is there any discussion of the legacy of the Taheb or is that outside the scope of the prophecies?

The Taheb is supposed to come "at the end of time," so I'm not sure what you mean by his "legacy."

If you're interested in this topic, the book I cited is available online; I've added a link to the original post

Thanks. I was not sure if he was supposed to come at the end of time or not.

The feeding of the five thousand echoes one of Elisha's miracles

I am an American living in Taiwan, where I own an English school. My background is in linguistics, and I have no special qualifications as an interpreter of the Bible. I was raised a Mormon, was an atheist for a long time, and am currently an unaffiliated and somewhat unorthodox Christian. My main blog is From the Narrow Desert.
I can be reached at my gmail address, which is wiltyc.

Books of scripture and chapters of John