Distinctive vocabulary of each of the four Gospels

A reader has provided me with a spreadsheet of all the words in the King James Version of the New Testament, with the number of occurrences of each word in each book. Using this data, I have put together these lists of the most distinctive words in each Gospel.

To be included in the list for a given Gospel, a word had to (1) occur at least 10 times in that Gospel and (2) have a frequency (per 1000 words) at least twice as high as its frequency in any of the other three Gospels.


There's obviously a lot of noise here, but one can still see the familiar areas of emphasis of each Gospel. Matthew is the most moralistic (righteous, hypocrites, reward, prison). Mark is the fastest-paced (immediately, straightway) and has a special focus on exorcism (unclean spirits). Nothing in particular stands out about Luke. John is, of course, the most distinctive; aside from the familiar themes (believe, know, life, light, love, truth), we can see that it is the Gospel in which Jesus talks the most about himself (I, me, mine, myself, am). It is interesting to note that sin (singular) occurs almost exclusively in John, while sins and sinners are more typical of the Synoptics. This is consistent with the idea (see here) that John means something else by sin than "moral transgression."


We can see here how John differs from the Synoptics in hardly mentioning the kingdom of God, which (with its Matthean variant kingdom of heaven) seems in the Synoptics to be the center of Jesus' whole message. The complete absence of devils (plural; the devil is mentioned about equally in all the Gospels) reflects the fact that there are, uniquely, no exorcisms in the Fourth Gospel.
at April 06, 2020 No comments:

"Hyper-Johannine" vocabulary in the First Epistle of John

One of the things that has come to my attention in the process of my ongoing examination of the Fourth Gospel ("of John") is how much of its distinctive vocabulary is shared by the First Epistle of John, leading me to state in a recent post that the two works are "almost certainly" by the same author. In this post I attempt to quantify that similarity.

I began (somewhat unscientifically, I must admit) by making a list of words that I think of as "typically Johannine" -- that is, as being typical of the Fourth Gospel as opposed to the Synoptics. One of these, comforter, was excluded from consideration because it occurs only in the Fourth Gospel and thus cannot be used to compare that book's style to those of other New Testament books. The remaining 10 words were: begotten, born, eternal, father, know, life, light, love, truth, and world.

Though this list of words was derived from my own impressions rather than by any quantitative process, quantitative measures back up those impressions: each of the 10 words does in fact occur significantly more frequently in the Fourth Gospel than in any of the Synoptics.

The charts below show the occurrence of each of the 10 target strings in each of the four Gospels and in the First Epistle of John. The numbers indicate what percentage of verses in each book contains the target string. Words that include the target string are included in the count; so, for example, instances of knoweth, knowledge, etc. count as instances of the string know. I have used the King James Version for convenience. The numbers would of course be somewhat different in the original Greek, but the overall patterns would presumably be similar. 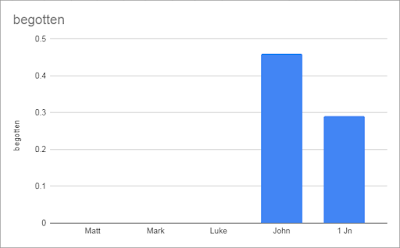 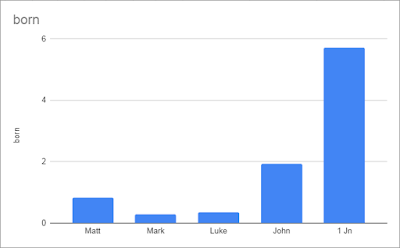 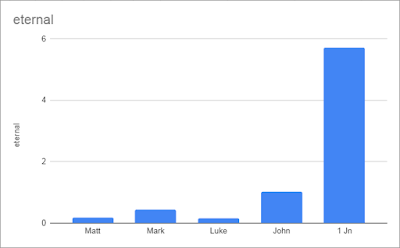 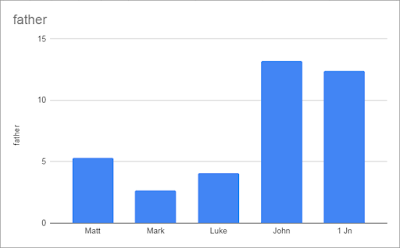 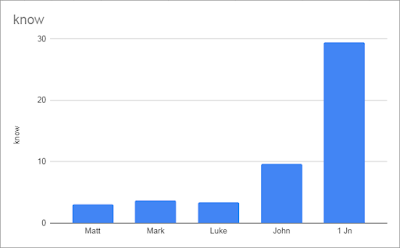 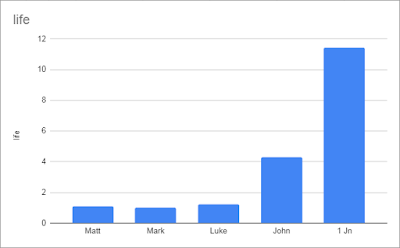 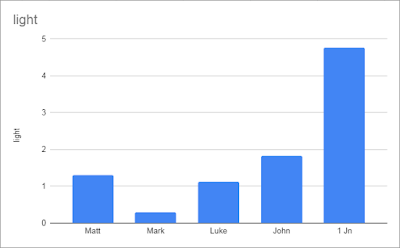 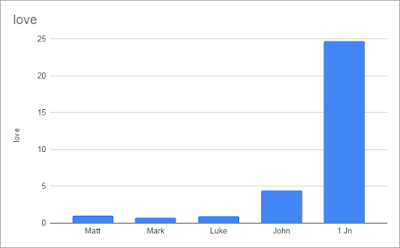 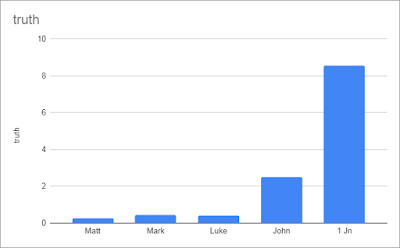 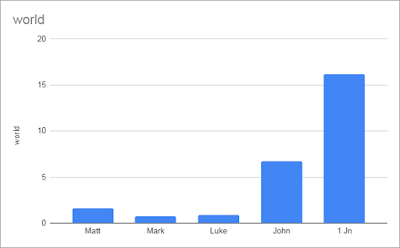 1. Every one of the target strings occurs much more frequently both in the Fourth Gospel and in the First Epistle of John than in any of the Synoptics.

There are two possible interpretations of this second fact. One possibility is that the differing frequencies are due to the presence of a great deal of narrative material in the Gospel, whereas the Epistle is more or less entirely theological in character. If this is true, then removing the narrative portions of the Gospel from consideration should yield frequencies more in line with those found in the Epistle.

The other possibility is that the stylistic differences are real, and that they show the Epistle to be written in an exaggerated caricature of the Johannine style. This would imply that the Epistle was not written by the author of the Gospel but rather by someone making a conscious effort to imitate his style.
at April 02, 2020 No comments:

The feeding of the five thousand echoes one of Elisha's miracles

I am an American living in Taiwan, where I own an English school. My background is in linguistics, and I have no special qualifications as an interpreter of the Bible. I was raised a Mormon, was an atheist for a long time, and am currently an unaffiliated and somewhat unorthodox Christian. My main blog is From the Narrow Desert.
I can be reached at my gmail address, which is wiltyc.

Books of scripture and chapters of John